Region IX, the land of amber waves of fire ants and swaying fields of oil pump jacks has finished its scholastic chess season for 2019.

This year has seen the growth of scholastic chess teams and clubs throughout the West Texas Region. The Midland Scholastic K-6 Chess League boasted eight team this year. Traditional regional power Trinity School was strong as usual, but as the schedule progressed, Carver School kept pace with Trinity winning match after match. By the quirk of the schedule, the two undefeated teams met the last week of the season at Carver, but Trinity again came out ahead by a 38-18 count finishing their season with a 7-0 record and another undefeated season. Trinity’s top board, Avi Mallik was 23-0 going into the last round of the Carver match, but he lost a tough game to Carver’s top board, Caleb Camiring.

Carver finished its season 6-1 with a three way tie for third place between Midland Christian, Greenwood and Hillander all with 4-3 records. While Trinity kept its title for another year, next year will be tougher as they are losing four of their top six boards to seventh grade. Another highlight of the season was Faskin School winning two matches, its first wins in its third season in the league.

While the scholastic chess league boasted two new teams this year, there were also new teams started up at Midland and Lee High Schools, as well as new middle schools in San Angelo. It’s hoped we’ll have enough teams for a 7-12 grade league in Midland next season.

The Regionals were held in Greenwood this year and brought in over 100 players from all over West Texas.

In the team competition, Trinity was first with 24 points, followed by Midland’s Goddard Junior High with 19.5, Greenwood with 18, Midland High School with 11 and San Angelo’s Grapecreek with nine.

In the K-6 division, Trinity sixth grader Gavin Dorfner won first place with a 6-0 record in a wild and dramatic finish.  In round five, Carver’s Caleb Camiring again beat Avi Mallik in a beautifully played pawn up endgame. That left three undefeated players going into the final round, Caleb, Trinity’s second board Jackie Liu who finished the scholastic season with 24 wins without a loss or draw, and Trinity’s third board Gavin Dorfner. In round six Caleb and Jackie played each other which was a rematch of their scholastic league game that Jackie won. Meanwhile Gavin played Hunter Williamson, Hillander’s top board. Gavin won his game pretty quickly finishing 6-0 and all eyes turned to board one to see who Gavin would play in the playoff for the Regional title. Just like in their scholastic game, Jackie got off to a strong start which he confidently traded down to a knight and pawn ending against just Caleb’s king. Then the shock slowly started to set in and the heads started to scratch. Set up the position for yourselves. Caleb had his king on h8. Jackie had his pawn on h7, his knight holding it on f6 and his king on e7, and everywhere else the king could think of moving to. The result was a very weird draw, leaving both Caleb and Jackie with 5.5 points and making Gavin the champion at 6-0 without the need for a playoff.  Jackie won the playoff for second place leaving Caleb in third. Trinity’s Avi Mallik was fourth and Greenwood’s Joshua Ramirez was fifth.

In the K-6 team category, Trinity was first with 30 points. Carver was second with 25.5 followed by Greenwood with 24,Odessa’s Milam was fourth with 18.5 and Midland’s Santa Rita was fifth with 16.

It was an exciting year in Region IX, and now we need to rest for the summer. 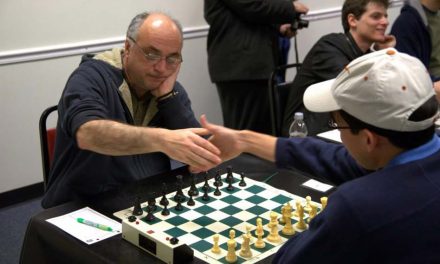 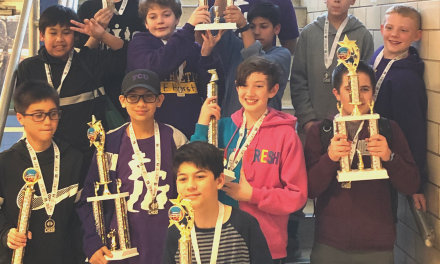 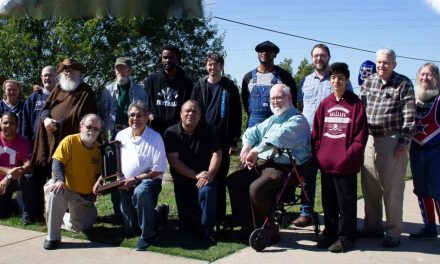