There was a time when Harmon D. Throneberry, Sr. was known as “Mr. Chess” in the San Antonio area because of all the chess tournaments he organized and directed. This was long before US Chess membership records became automated.

According to his MSA page, his current rating is 1775 as of January 1990. His rating was a lot higher in the good old days. This Author’s Chess Life collection spans five decades. The January 1982 Annual Rating List shows he achieved Category I “M status” meaning he had a strong Class A player rating.

Mr. Throneberry distinguished himself as a member of our Nation’s Military, achieving the highest enlisted rank of Command Sergeant Major. Upon retiring he and his family settled down in Watauga. He realized he wasn’t done with chess, yet. He founded the old Watauga Chess Club (now known as the Tarrant County Chess Club). He was its first Club President, directed the Many Springs Open tournaments for a while and mentored and encouraged a new generation of tournament directors. One insisted on using pairing cards. In the background was Harmon Throneberry quietly using a computer loaded with SwisSys for quality control. He was pleased the card method still worked well.

After about six months he stepped back. The new leaders and club were poised for greatness thanks to his teachings. As time passed, he seemed to fade quietly away yet popped up occasionally to let all know he was watching and liked what he saw in his young proteges. An example of this occurred in October 2005. One Watauga Chess Club member had been reactivated for the Global War on Terrorism. For all anybody knew this could have been his last chess club meeting. Harmon Throneberry arrived unexpectedly, brightened up the entire room, and boosted the morale of the Soldier and his family. He also paid a similar surprise visit at the 2017 Texas Armed Forces Chess Championship. Health issues prevented him from playing and staying long. But it is was a great visit.

Mr. Throneberry knew about the Internet and domain names long before most people realized what a mouse was for. He purposely purchased the domain name “texaschess.com” and set up a coding relay so anyone typing that in a search bar would automatically go to “texaschess.org” (the TCA website). Try it. It still works.

The letters “PUFL” on Mr. Throneberry’s hat stand for “Paid Up For Life” in the American Legion. That’s how he does things. He is also a US Chess Life member and a TCA Life Patron member. He continues seeking opportunities to help where it’s most needed, such as his timely and substantial donation to the 2018 Texas Armed Forces Chess Championship.

It’s his way of paying it forward.

During the anniversary month of our Nation’s Independence, for his years of selfless devotion to our Nation and to all of Texas Chess, it is most appropriate we at Texas Chess Association salute and recognize Harmon D. Throneberry, Sr., Command Sergeant Major, U.S. Army (retired), as our Player of the Month for July 2019. 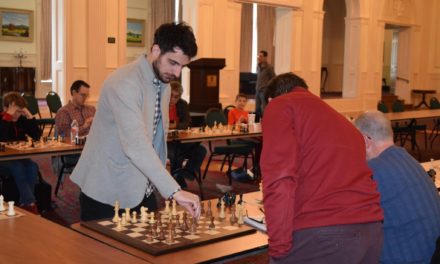 Player of the Month for April 2021